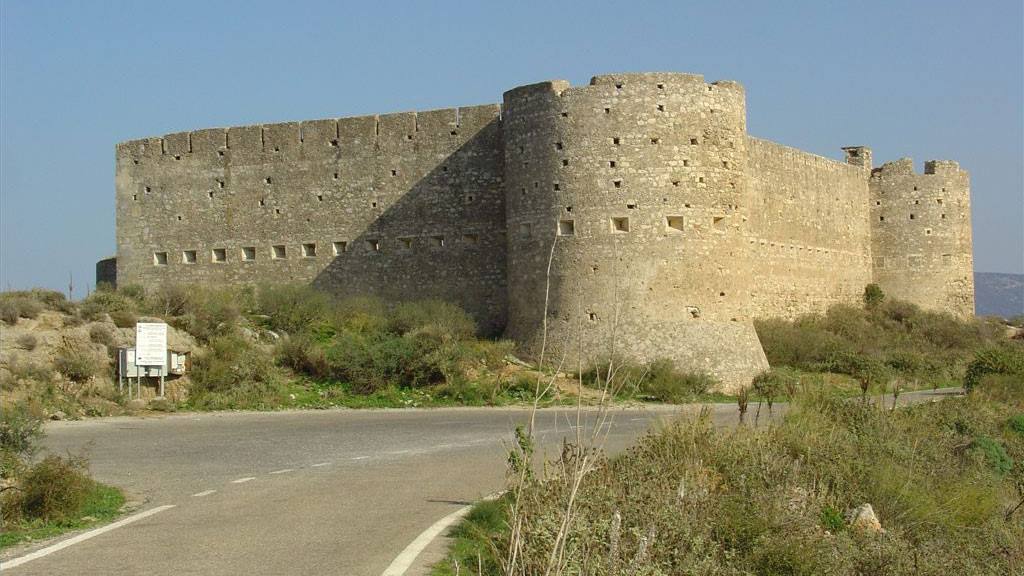 The ancient city of aptera was founded in Palaiokastro, low elevation to a place that remains unique for its natural beauty, with the beautiful Bay of Souda Bay to the North and the imposing mountain range of the White Mountains to the South.

The strategic position of the city with two harbours, the Minoa (current Marathi) and Kissamos (near present-day Huts) in the entrance of the natural Gulf, provided the possibility of controlling the movement of trade, favored the development of. For this reason characterized by the historian g. Svoronos as the most commercial city of Crete and at periods of peak, one of the most powerful. Ruled large land area, mainly flat and fertile, which crossed to the South and East of the river "Pytktos" (today called "Koiliaris"). The earliest mention of the name occurs in the linear b script tablets of Knossos as A-pa-ta-wa (14th-13th century BC). According to the findings of archaeological research but also the testimonies of ancient geographers and historians populating this Hill begins in the 8th century b.c. and continues uninterruptedly until the 7th century a.d, so due to strong earthquakes and pirate raids the city deserted. For the origin of its name there are many beliefs, most of which seem to be the epithet of Artemis: Artemis Aptera. In another version of his name gave the city the famous Hero of Delphi Pteras or Aptera, while according to legend delivered by Stephen of Byzantium (6th century a.d.) the name comes from the mythical race that was among the Muses and Sirens, which defeated the sirens, they flew their wings (left apteres), became white and fell into the sea.

The period of great prosperity as an independent city-state begins in the 4th century b.c., which gradually emerges as the most commercial city of Crete. The commercial and political agreements with Egypt, Libya, the kingdoms of Pergamos and Bithynia but setting consuls in many cities of Crete, mainland Greece, the Peloponnese, the islands of the Aegean, the Adriatic, the Hellespont and Asia minor, in conjunction with military force and its diplomatic flexibility vithynia.

The earthquake of 365/5 a.d. marked the final decline and eventually the next strong earthquake, 7th century. m. x. the definitive abandonment of the city. The establishment-before 1182-the small monastery of Saint John the theologian, Patmos monastery's property until the 1960s, was in the central area of the ancient city, while the Castle, located in the North-East edge of the site, built by the Turks conquerors in 1866. Shortly after the middle of the 4th century b.c. the city was fortified with strong walls 3,685 m length, which surrounds the entire plateau of the Hill. Made of large rectangular stones more elaborate on the West and the southwest side and less elaborate or polygonal in East, complemented by rectangular fortified towers, mainly on the West side. On the same side recently revealed one of its gates while other inputs there are in the Northeast and South. In 1942 the Germans occupiers excavated small Doric Temple featured by the excavators ' bilateral sacred "dated to the 5th century b.c. in the same area has revealed part of the great temple that has been used for many centuries and probably was one of the main temples of the city. Other small Doric Temple has been attributed by the excavator, Stylianos Alexiou, goddesses Demeter and Persephone and has been dated to the 1st century. m. x. town theatre, built in a natural cavity in the South of the area, has built-in sections, which kept some of the stone grandstands and part of the scene. The most impressive for the size and maintain the monuments are the Roman cisterns that they accumulated rainwater from the roof vents, but also by numerous cisterns, via a pipeline. The tanks were supplying the two large bathrooms, which later turned into laboratories. In the same period belongs and public building with niches, part of which is preserved at a height of. The Aptera has two cemeteries: one in the Southeast with chiseled tombs and one in the West, which conducted several excavations in recent years. Near the gate have been funerary monuments and memorial inscriptions of the 1st-2nd century a.d. in the rest area of the cemetery that extends down from the old village, there are several types of burials of all periods, from the 8th century. e.g. until the 3rd a.d. and a variety of types, from the most simple, with burials in jars of the 8th and 7th century BC. e.g., lakkoeideis of all periods, but also more elaborate with large Chamber carved into the rock.

Representative finds the various periods of the city and the cemetery (vases, coins, statuettes, inscriptions, sculptures and other odds and ends) are exposed in the Archaeological Museum of Chania.

In addition to this silver-and goldsmiths workshops and martial weapons, there were temples dedicated to various Gods, villas, theatre, baths, huge water tanks and other stores. The deinoi archers, Apteraioi, fought as mercenaries in various areas outside Crete bringing wealth to the place. The introduction of valuable raw material, which was silver, by returnees mercenaries, gave to the city the ability to cut its own coins and to develop more of its own independent and dynamic economy. The coins were elaborate and usually depicted, in front the goddess Artemis and, on the other hand, the city's founder King Aptera, while other types of Apollo or IRA and torch, bee or bow.

The archaeological site of aptera is free for the guests daily from 8: 30 to 15: 00, except Mondays.

There are also two fortresses in the vicinity of Antiquities of exceptional historic interest built during the Turkish occupation the fortress "Palaikastro" which was built by the Turks following the revolution of 1866 and the fortress of Intzedin "to" Pole which was built in 1872 and had barracks, hospital and other facilities.